‘Pip Wangler’, is a 3D puzzle game from Mousepickle for iPhone® and iPad®. You can find out more about Pip Wangler, and can buy a copy if you wish, from the App Store...

A unique 3D puzzle game for iPhone and iPad...

Pip Wangler sets you slippery 3D puzzles to wrestle with against the clock. Try to Wangle your Pip from one end of a bendy Wangle Wire to the other, as quickly as you can, by spinning the whole thing this way and that. Gravity is your friend, but the twists and turns of the Wire are not!

Completing each puzzle quickly enough unlocks a fresh one for you to try, and you can try each one in four different Wangle Zones - Earth, Fire, Air and Water - each with a different look and feel.

The trickier zones give you higher scores: The faster the Pip is moving as it slides across new bits of the Wire the faster your score will go up. There’s no penalty for letting the Pip slide the wrong way (back towards the start) but if you do that it’ll take longer, and being quick is the only way to unlock new Wangle Wires... 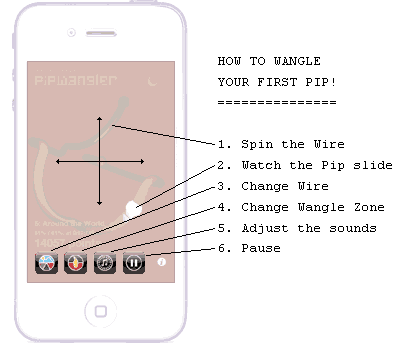 ‘Easy Earth’ is the simplest Zone. The bendy Wangle Wire isn't too slippery, so the Pip won't slide too quickly and catch you out.

‘Frisky Fire’ lets you try the puzzle with a very slippery Wire. The Pip will accelerate rapidly, but if you spin the Wire incautiously (which is easy because the Wire now rotates more freely) you’ll find the Pip isn’t accelerating in the direction you wanted! 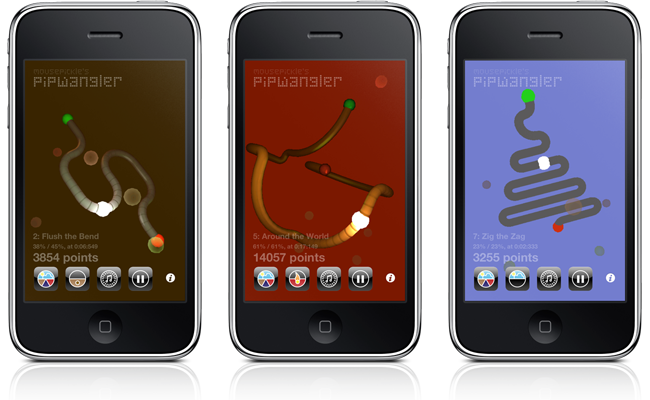 Finally, ‘Deep Deep Water’ plunges you into a mysterious gloomy world, where only the light from the Pip itself serves to illuminate a blackened Wangle Wire. Spin a complex Wire too fast, and you may find you’re lost!

We’re always keen to hear what you think about our applications. You can send any feedback, comments, or suggestions directly to pipwangler@mousepickle.com .