‘Moon Mamba’, is a 3D arcade game from Mousepickle for iPhone®, iPad®, and iPod touch®. You can find out more about Moon Mamba, and can buy a copy if you wish, from the App Store...

A super-fast 3D twist on a classic game...

Guide your Moon Mamba hither and thither around his lunar prison, eating passing satellites, getting longer, getting faster. But watch out: If he bites his own tail the game is over! 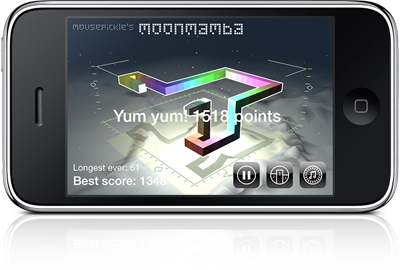 As with the classic ‘snake’ game, you’ll find that your Moon Mamba can leave the playing area out of one side, and come back in the other. This time, of course, he can also leave and re-enter via the top or bottom as well! To help you keep track of where your Moon Mamba is in the playing area, some little indicators appear around the edges. And you’ll see that the Moon Mamba casts a helpful shadow.

Pointy satellites appear in a random position, one at a time. If you eat a satellite quickly you’ll get lots of points, but leave it uneaten and you’ll find that it slowly changes colour. Dimmer satellites give fewer points, and once they start flashing red the Moon Mamba no longer scores points for merely moving around. When that happens your score isn’t going anywhere until you eat that satellite all up!

To help you locate the satellite, and work out how to get the Moon Mamba moving towards it as quickly as possible, a light dot appears on the desolate rocky surface beneath it. When you first start to play, you will also see a dotted line that extends from the Moon Mamba’s head and leads towards the satellite. As the game progresses this gets fainter, and then disappears completely!

You can look around the playing area, and change your point of view, by dragging across the screen with two fingers. This can be a particularly good way of identifying exactly where a satellite is, and of avoiding any unwanted collisions between the Moon Mamba’s head and his tail.

You can pause the game at any point by tapping the pause button at the bottom of the screen, or by swiping down the screen with three fingers.

No others at present.

We’re always keen to hear what you think about our applications. You can send any feedback, comments, or suggestions directly to moonmamba@mousepickle.com .