Jason from Mousepickle takes part in charity challenges from time to time, and is always on lookout for generous sponsors! In June 2009 there was a charity bike ride on behalf of the British Heart Foundation...

On the 21st of June 2009 (Fathers’ Day, and also the Summer Solstice) I took part in the London to Brighton charity cycle ride. With the help of some very generous sponsorhip from friends and family, and from colleagues old and new, I managed to raise over £1100 for the British Heart Foundation.

To make the ride as a whole slightly harder this year I decided to travel on my trusty Brompton folding bicycle ‘Brenda’. It was a decision I came to rue later in the day, as this model features neither the high gears necessary to sprint downhill, nor the very low gears necessary to tackle a nasty hill climb. 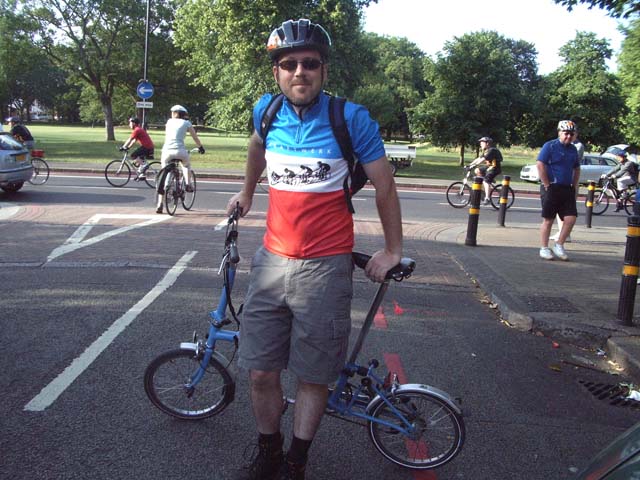 In spite of my good intentions, I didn’t cross the start line until just gone 8am. It’s been my experience that the congestion on the ride increases through the morning, then tails off again; setting off after about seven thirty almost guarantees that you'll be stuck in a bike jam somewhere along the way!

On the plus side the conditions for the ride seemed pretty much perfect, with a bit of cloud cover to keep the sunburn to a minimum, and a gentle north-westerly wind at our backs. 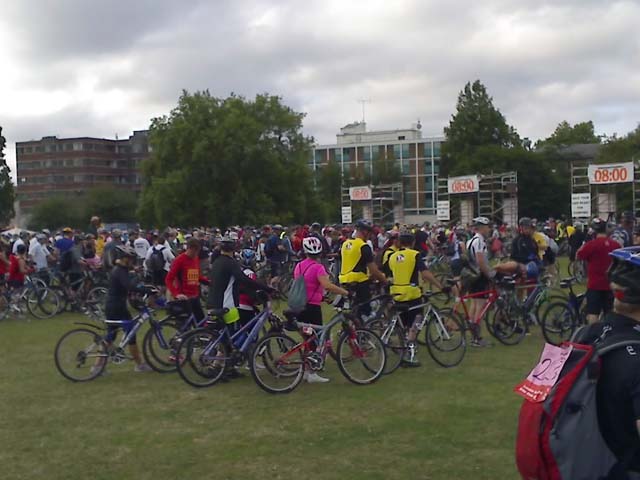 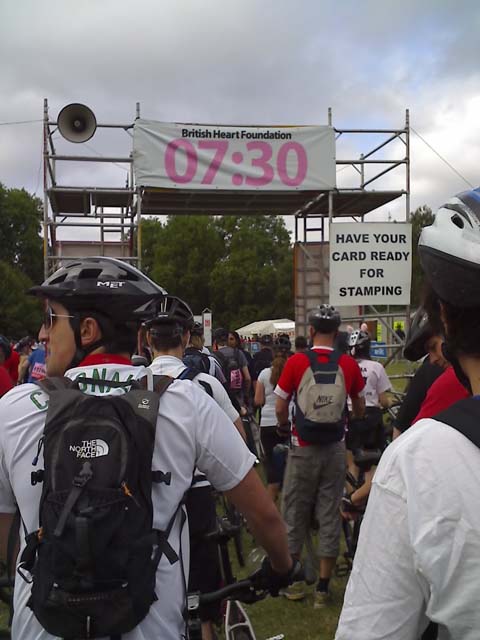 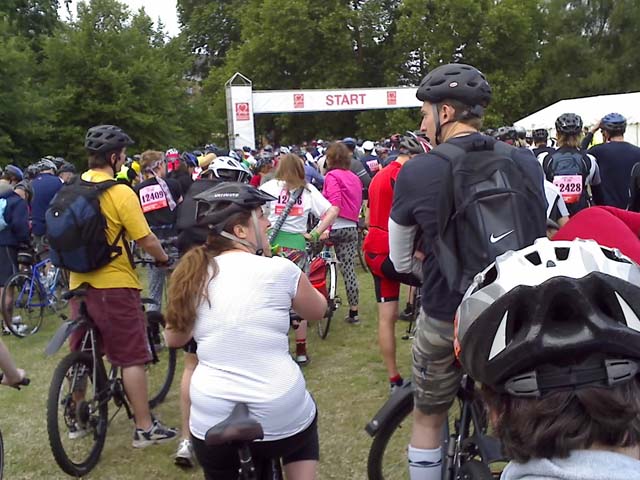 Being on a solo cycling mission this year, I figured I could make excellent time. Unfortunately (as you’ll see) the ride was indeed dogged by cycle jams and other hold-ups. The first significant queue is on the approach to Tooting, at 8:16. 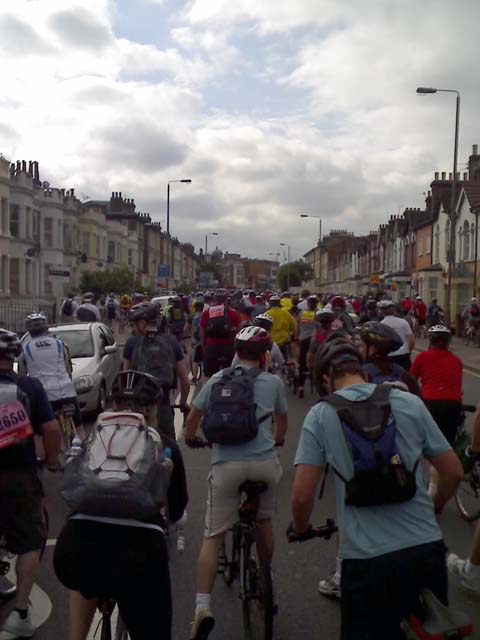 The ride as a whole comes in several phases, with a London bit, a leafy suburban bit, some rather posh countryside, and of course Ditchling Beacon and the descent into Brighton. 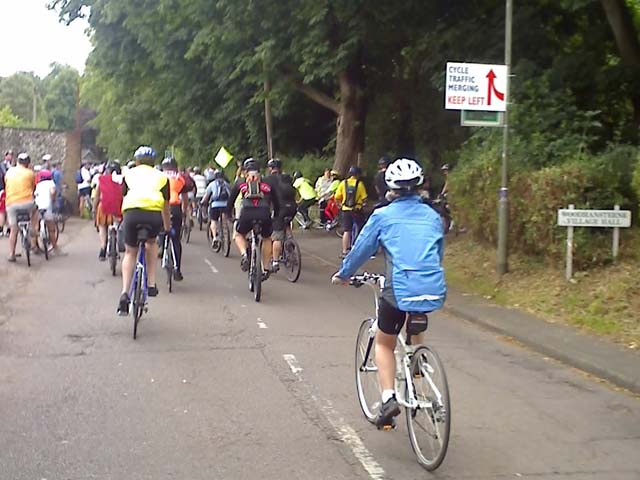 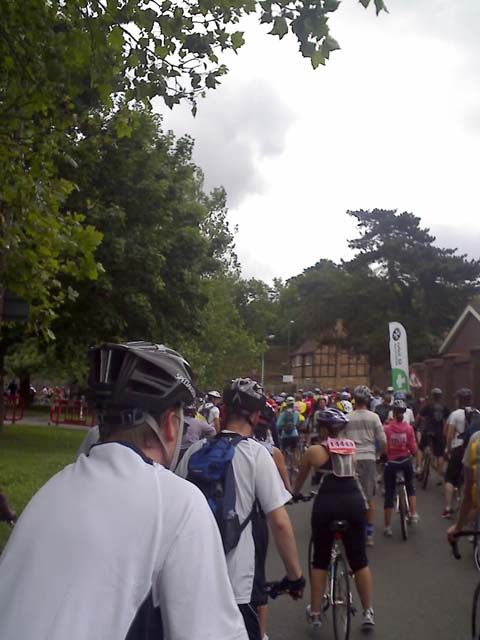 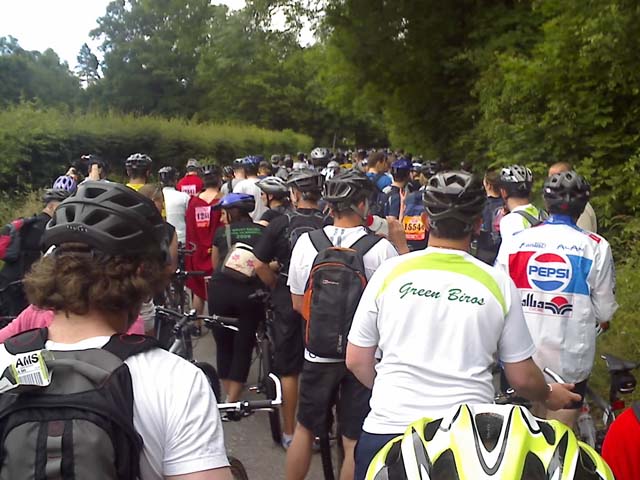 Unfortunately 9:12 sees the start of a frustrating extended period of shuffling along rather than riding properly; it only takes fifteen minutes to get to the top of the hill where we’re stuck, but it feels like much longer!

The hill itself seems to be the cause of the delay; on the narrower roads it only takes a handful of people to get off and start walking (especially if they walk side-by-side for a natter) to make it impossible for the rest of us to ride past them. Hey presto, a traffic jam!

This all takes place a few minutes beyond Woodmansterne Village Hall, the first of the Official Rest Stops, and about ten miles into the ride. 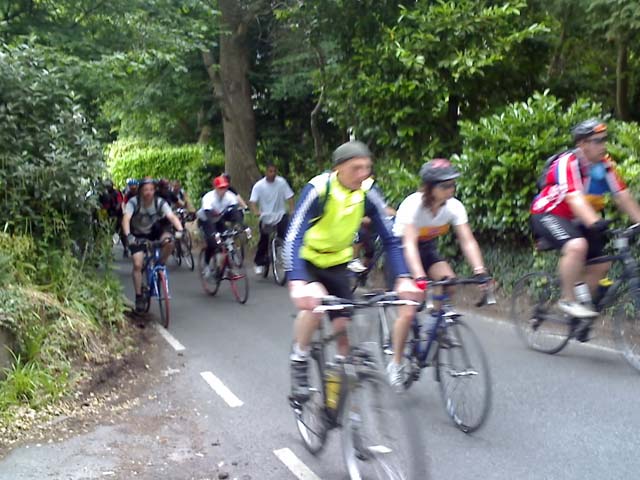 By 9:49 we’re past the blockage, and coasting along at a reasonable lick through open fields, but a serious problem awaits just a little bit further on... 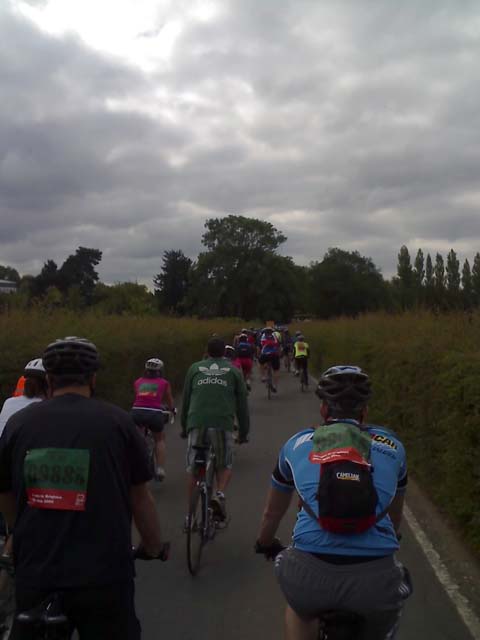 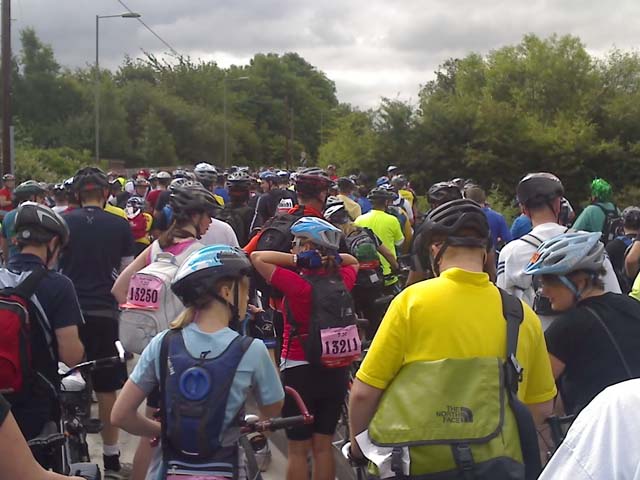 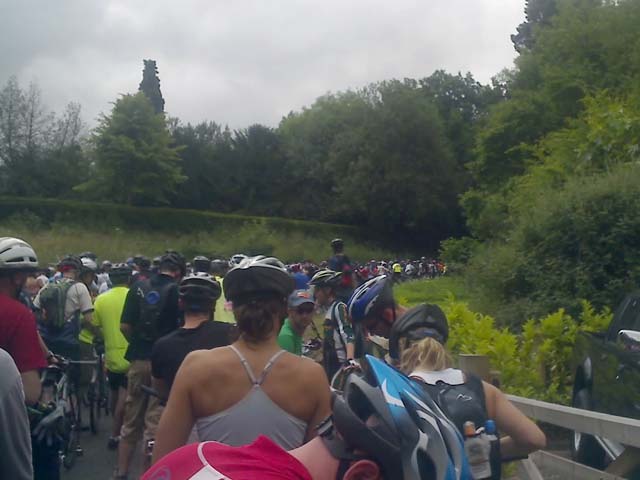 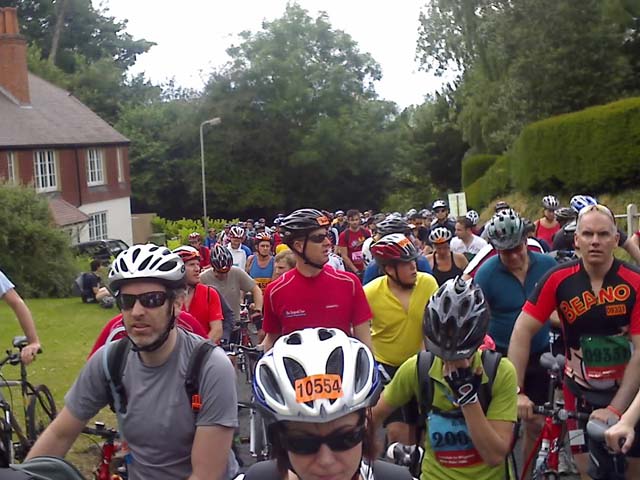 By 10:30 we have only just rounded the corner, and progress is getting slower and slower... 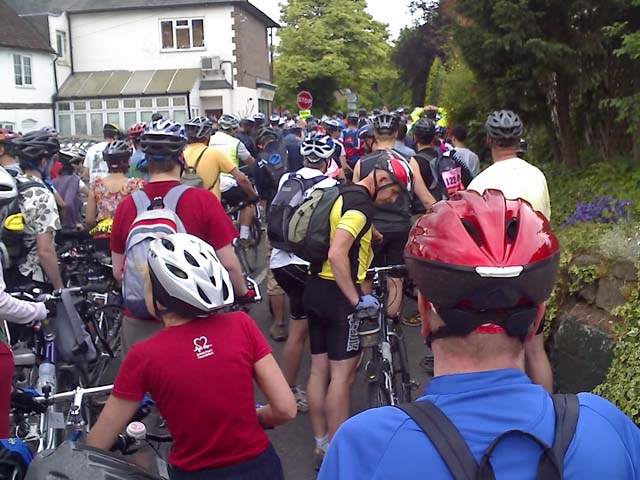 So much so that at 10:42 we’re on exactly the same spot! A spirit of cordial cameraderie emerges, and the man next to me offers round a bag of Jelly Babies. From the front of the queue we hear the occasional cheer as a cyclist dodges across the main road to continue the ride. 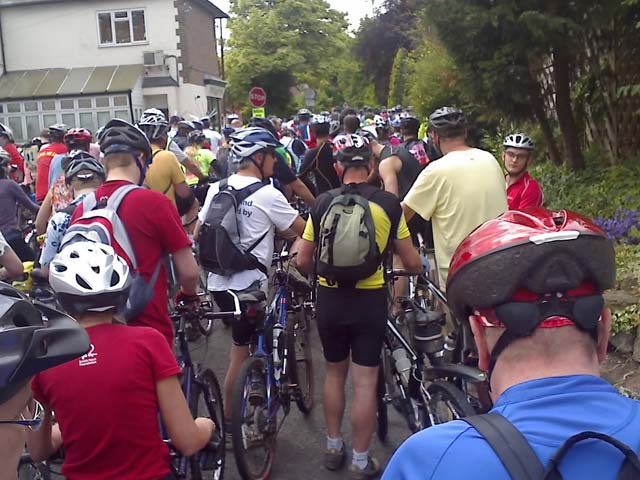 The nature of this delay (nearly an hour; a delay which I like to blame for what sunburn I did pick up) remains somewhat mysterious, although I suspect the traffic police hired to stop the A25 traffic, to let cyclists through, may have been called away to deal with something else for a time.

No matter; the crowd of onlookers at the brow of the hill roundly applauded the cyclists for their patience, and we were able to make good speed for the rest of the ride, as the bike traffic ahead had had time to move on and thin out a bit! 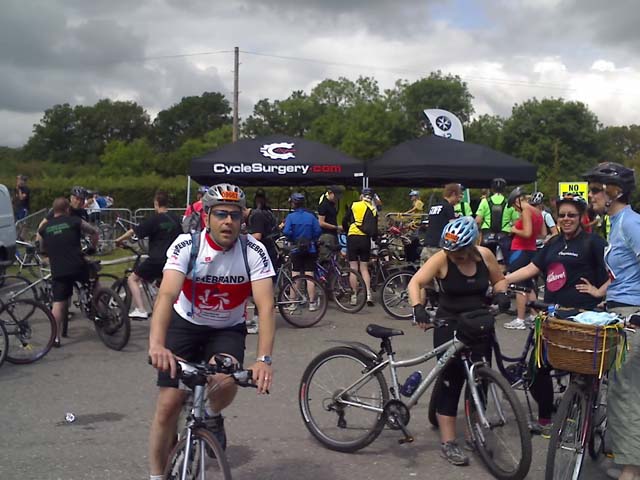 I reached Official Rest Stop E (the Dog & Duck) at 11:03am and grabbed a cup of tea. Each stop (lettered A to P along the route) has toilets, a first aid post, and - most importantly - a cycle repair workshop where labour is given free by local mechanics.

The tea was supplemented by a slice of ginger cake, and thus fortified I was ready to push on!

11:36 sees me taking a short breather at the top of Turner’s Hill; it’s a short but fairly steep climb, and certainly feels like it on the Brompton! As on previous years the local church are out in force, handing out free water (no wine), and unconditional love... 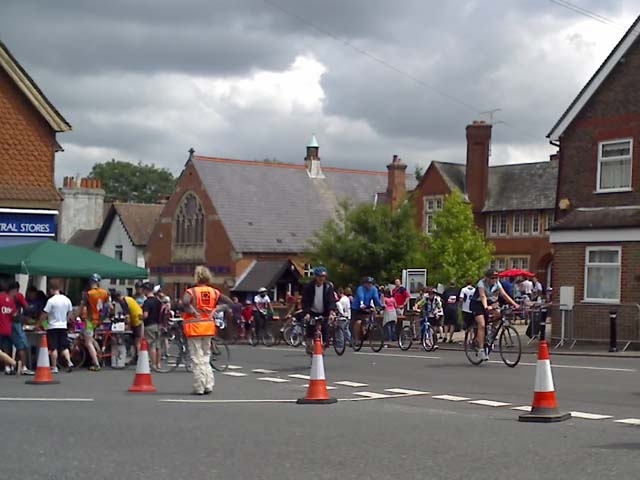 I ride on a few yards further before I park up, so I can hear myself think. No time to dawdle; being near the head of the group that escaped that last bike clot I need to press home my advantage! 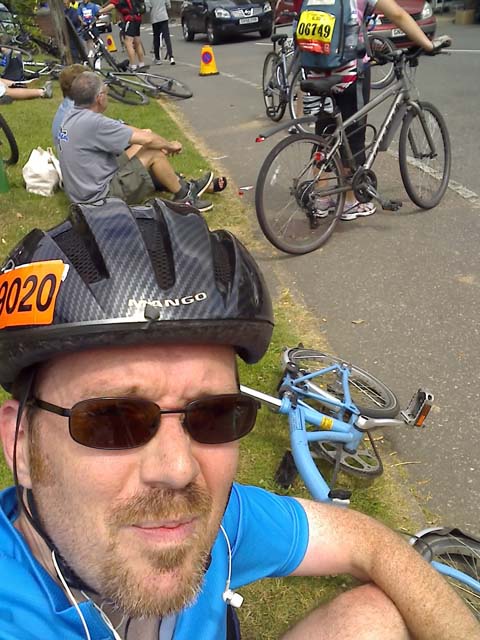 At the crest of the hill there’s always a bit of a party atmosphere, with a brass band on the green, a local-radio celebrity on a car-battery PA system, and a throng of bike riders enjoying the foaming nut-brown shandies of a small village pub. 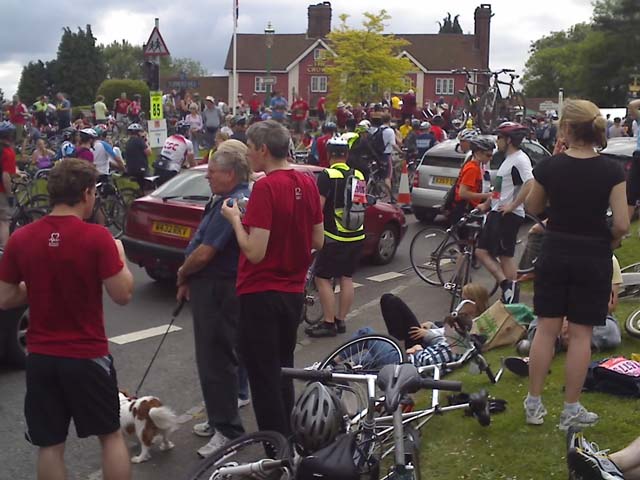 No beer for me! Instead, another steaming cup of tea at the next Rest Stop, at around 12:11pm. Other sustenance en route included a couple of tasty cheese rolls, and the obligatory banana. 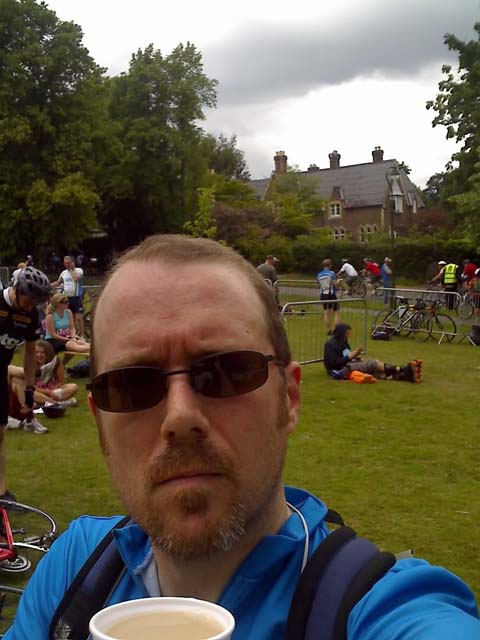 Brenda takes a rest too. Just beyond her you can see one of a number of roller-bladers who also completed the 54 mile route. 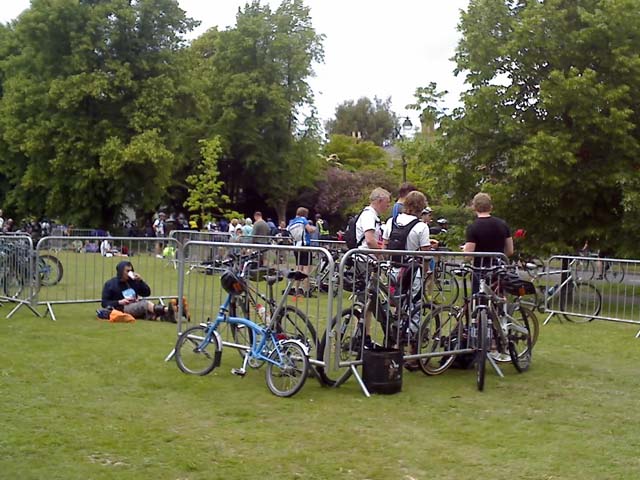 It seems like a very long way to travel on blades, especially with the hill climbs to contend with; other outstanding effort awards should go to:

... all of which puts my Brompton ride into some kind of perspective!

Just one hour further on (13:14) and I’m nearly at the top of Ditchling Beacon. The view back towards London is fantastic, but for the most part we’re all too busy cussing and sweating to pay it heed. 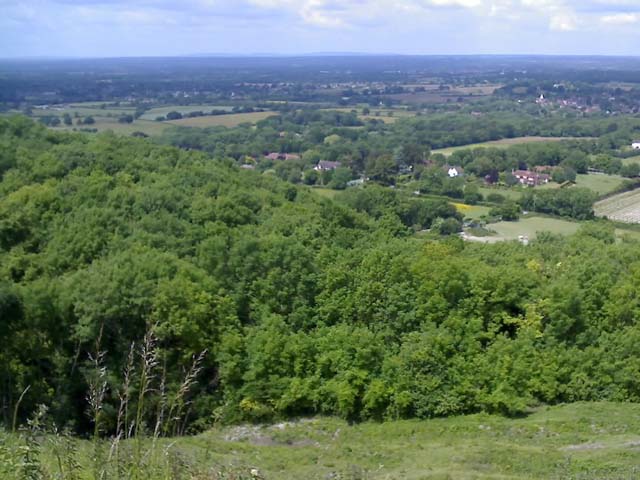 I have to admit that this year I couldn’t make it all the way to the top without getting off and walking for a bit! Even so, I rewarded myself with a lolly at the top of the hill. 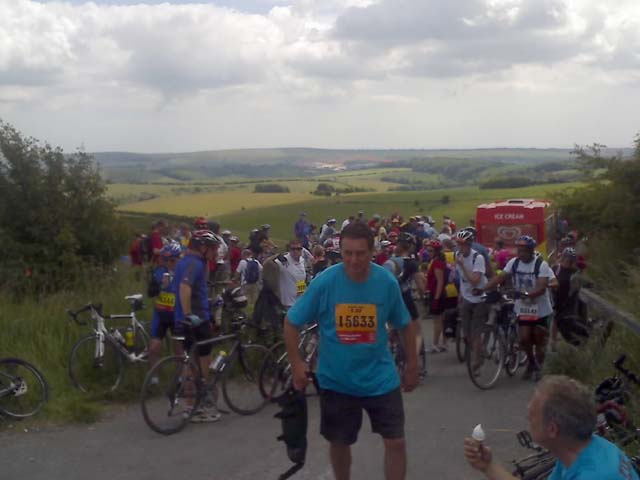 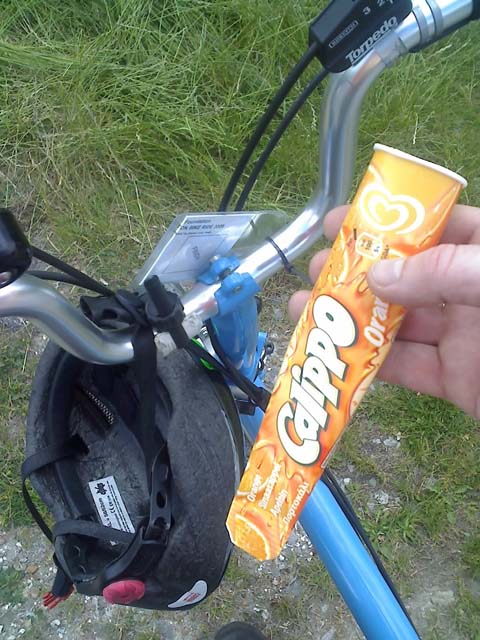 Time to push on to the finish line; it’s all down hill from here! 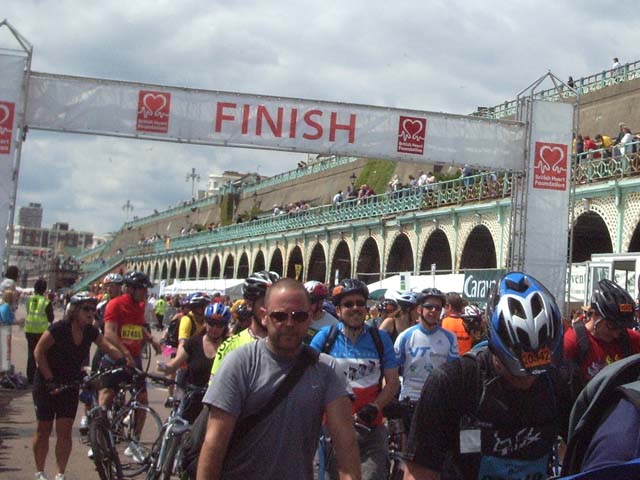 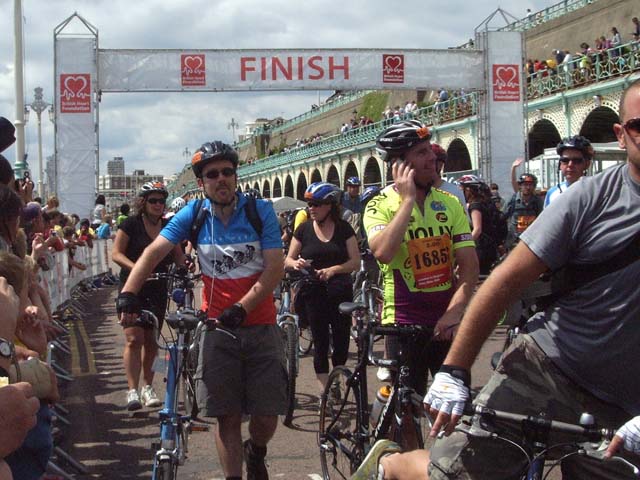 Fortunately Becky’s there to take some evidentiary snaps. I cross the finish line at 14:20, which means a total journey time of about six-and-a-quarter hours. Take off an hour or so for dawdling in queues, and it might even be a personal best! 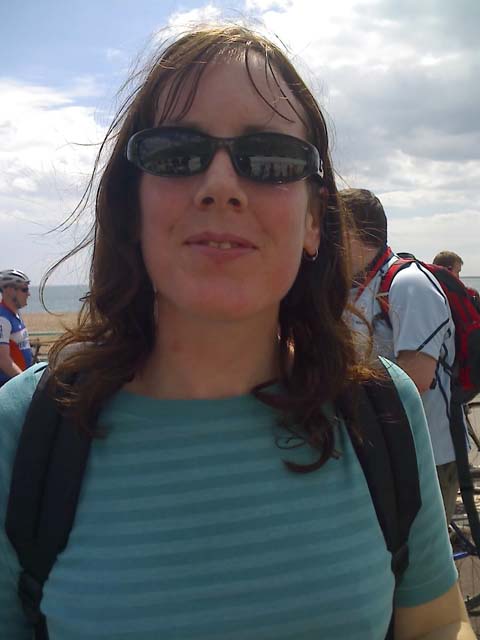 Here are a few final images of other participants crossing the finishing line. There was a large and cheerful crowd there to welcome us all in, which was a great finish to a good day in the saddle! 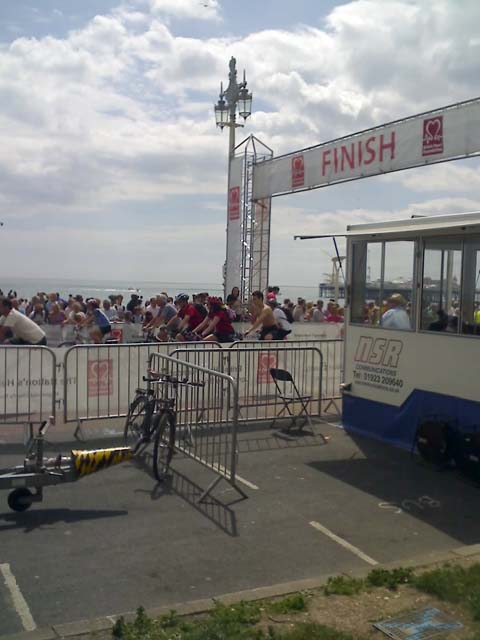 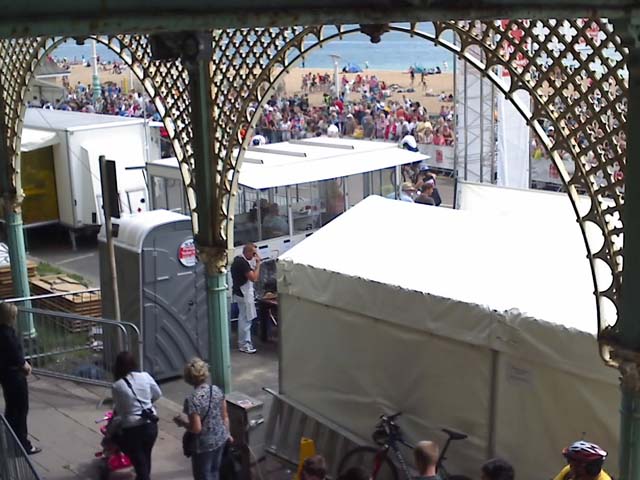 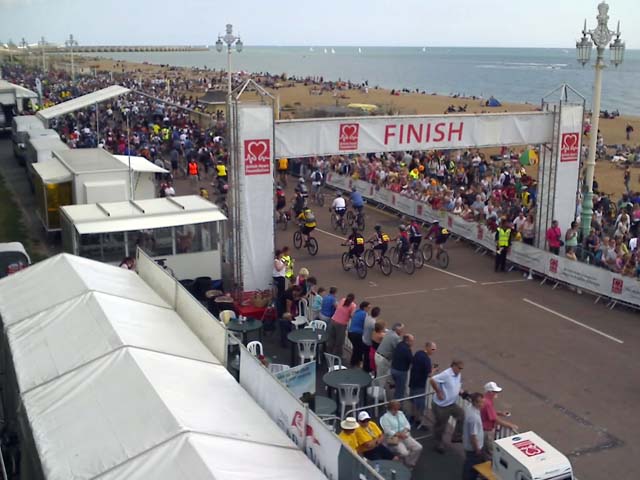